As I was saying last week, I’ve learned that for reading from your work at an open mike, it’s important to put yourself out there.  So last Wednesday, at the Magnet event in the Castro, I stepped to the mike and read a passage that included the following gay love-scene passage.  (Warning:  it’s tame by Internet standards, but it’s still adult content.)

I once made the mistake of reading a “tame” scene in front of the Smack Dab audience, and I could practically hear the crickets by the time I was done.  This time, I was determined not to repeat the same mistake.

The artwork Peter sees on the wall of his lover’s bedroom in the passage is Andy Warhol’s 1982 painting Querelle, which you can view and read about here.  I suspect this movie poster has been adorning the bedroom walls of many a gay bachelor pad for the past thirty years.  The blue-painted version of this movie poster is the poster I envisioned Peter looking at as I wrote this scene. 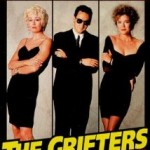 All that said, You Are Here doesn’t have that many sex scenes.  I got my general philosophy toward sex scenes from none other than my own mother about twenty years ago.  We had just watched on videocassette one of my favorite movies of all time, Stephen Frears’s 1990 noir masterpiece The Grifters, and after the movie was over, my mother commented that the filmmakers had done the sex scenes right — that is, they showed enough sex to let her understand what was going on, but not so much sex that she got embarrassed or uncomfortable.  I’m pretty sure she forgot ever saying that, but I didn’t.  And I think her advice holds true for “Querelle.”  Warhol used bold colors — particularly the red-painted tongue — to heighten the eroticism of the two young men in the picture, but in no way that feels offensive.  This is the kind of art I aspire to — art done right.

One final note:  so as not to give the story away, I changed the name of Peter’s lover in the audio clip to “the man.”