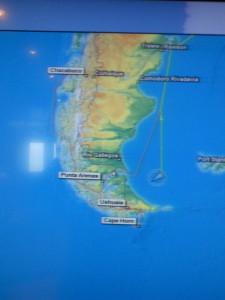 We were supposed to turn into the Strait of Magellan (following the red line on the map), but instead we went around the tip of Argentina to Ushuaia.

Sailing south of Puerto Madryn, we were supposed to turn into the Strait of Magellan for a day of scenic cruising and then dock in Punto Arenas, in Chile.  But high waves and gale-force winds compelled the captain to deliver the bad news that the ship couldn’t turn into the strait without tipping over.  So instead of two days of sightseeing, we got two days of riding the open ocean—and what a ride that was.

Even before the captain’s announcement, we’d already had our taste of rough seas; one night, the ship rocked from side to side so badly that I lay in bed, in near-total darkness, trying to remind myself that this kind of rocking was likely nothing worse than what most sea travelers endured, and not the coming of the next Poseidon Adventure.  But even that didn’t prepare me for the two-day ride in store for us.  I felt I was riding on a carousel horse, or a slow-moving kiddie roller coaster, except that this was no two-minute amusement park ride.

Even so, the scene from the ship’s outside decks – once they opened the outside decks to the passengers, that is – offered a constantly-shifting landscape of striking images.  The play of waves and clouds, of sun and shadow, supplied its own drama.  I can only imagine what the first seafarers , those explorers who navigated these waters in much cruder vessels than the one I was standing in, must have imagined when they first contended with these cold, harsh, dangerous waves, the wind gusting ceaselessly into their faces.   As for me, the worst I had to contend with was the boredom – and the drained swimming pool. 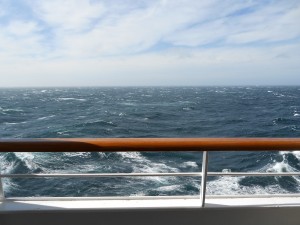 I took this picture off our balcony shortly after the captain’s announcement. With the wind and the ship’s rocking, I was too scared to get close to the railing to snap the picture. 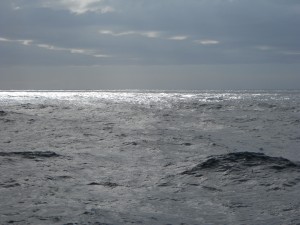 I took this picture after the captain deemed the outside decks safe for passengers. By then, we’d been on the open ocean for three straight days. 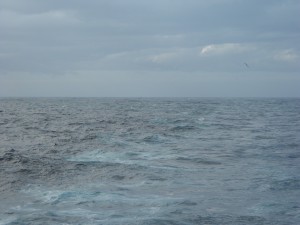 I took this picture only a couple of minutes after the picture above. The waves, the sky, and the wind made for ever-changing scenery. 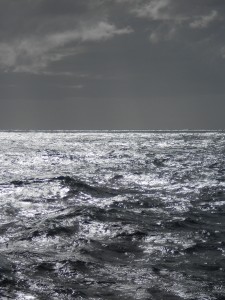 One of my favorite sea pictures, in which everything seemed to turn black and white. The sea foam seemed frozen onto the wrinkled surface of the water. 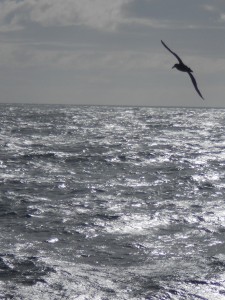 The bird in the upper right is not a gull, but one of the many giant petrels that followed our ship.

A group of Cape petrels riding the waves, many miles from shore. There’s a flying Cape petrel to the right.