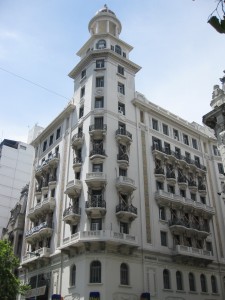 Much of the architecture in Montevideo made me think of Europe.

A night of sailing down the Rio de la Plata brought us to our first port of call, the Uruguayan capital of Montevideo.  The morning was as bright and as placid as the sun that adorns the Uruguayan national flag.  Until that morning, Montevideo meant not much more to me than as the answer to an eighth-grade Spanish test.  So I disembarked with no expectations of the city, no idea of what I might see.  And what I saw was a congenial port city of over a million people (in a country of roughly three million):  tree-lined streets and plazas, beautiful old buildings, and the high doors and tall shutters of homes I usually associate with those in Rome or Paris.

I walked around Montevideo that morning with the same attitude as I had when I walked around La Recoleta three days earlier.  I’d never learned Uruguayan history or culture at school, and I didn’t have time to study Uruguayan history or culture for my one-day stopover.  So I figured I’d have more fun to guess about the city — how it got here, who lived here, what stories might be hiding behind its doors and shutters — than to know for sure.  So at the Plaza Independencia I relied on my imagination to fill out the biography of the man whose colossal horseman statue dominated the center of the plaza, even though I was fairly certain that the guy probably had his own Wikipedia entry.

But now that I’m home, after doing a little research for this blog post, I kind of regret not knowing one indelible piece of Montevideo history — particularly as it relates to “La Cumparsita,” the iconic tango.  (If the title seems unfamiliar, it’s the song most people think of when they think “tango.”) La Cumparsita, I later learned was composed at the site of one of Montevideo’s most striking buildings, the Palacio Salvo, which rises prominently in one corner of the Plaza Independencia.  To think that I’d stood near the spot where one of the most recognizable songs int the world — a song so famous that it’s practially woven into human consciousness, a musical Mona Lisa or Hamlet — had been written!  And in a place that not a week before I scarcely knew existed!  I was more connected to this strange place than I realized.

Even more than architecture, what struck me most about Montevideo was the art — not only the vivid murals that covered many of the outside walls of the buildings, but also the art for sale at the galleries in the city’s Ciudad Vieja.  Of these, our favorite was the Acatrás Del Mercado, and of the many artists represented in that shop, our favorite turned out to be the Montevideo-born Alvaro Bonilla, whose depictions of freighter ships seemed to have — to me, at least — a haunting, almost human dignity. 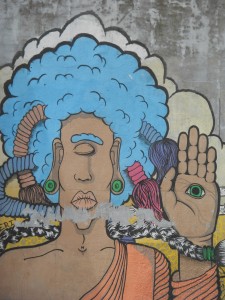 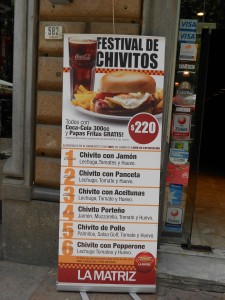 Sign advertising “chivitos,” a steak-ham-cheese-egg sandwich that’s a Uruguayan national dish. I didn’t think I had the guts — either literally or figuratively — to try one. 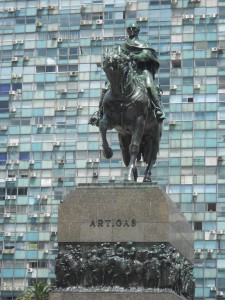 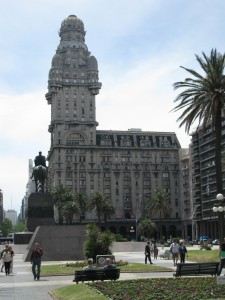 The skyline-defining Palacio Salvo, Montevideo. One of the world’s most famous tangos was composed at a café where this building now stands. 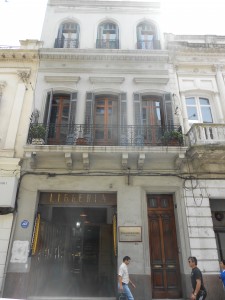 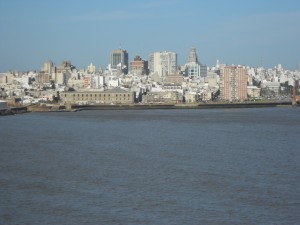 Leaving Montevideo. The Palacio Salvo is at center right.