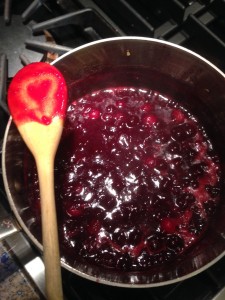 Wearing my heart on my spoon for Thanksgiving.

I volunteered to serve Thanksgiving this year. It’s long been my favorite holiday—a simple day to relax and eat and feel thankful for whatever you want to be thankful for. The only stress of the day boils down to a simple but fun question. What to cook?

Luckily for me, the not-to-be-outdone staff at the New York Times launched an addictive new cooking app, just in time for the holidays. The app holds thousands of recipes covering what feels like every cuisine on earth, main dishes, side dishes, desserts, you name it. Thanksgiving is covered on the app as exhaustingly, maybe even as numbingly, as next year’s presidential election.

Rummaging through the cooking app led me to thinking about where I am with my writing. With my latest manuscript more or less finished, I’m now in the process of letting go of characters I’d grown to know and love over the past three-plus years. A new story will have to fill the vacuum. But who will make up this new cast of characters? What form should this new novel take?

It soon struck me that the answer is as thrilling—and as terrifying—as trying to figure out what to put on the table at Thanksgiving. I may not know what I’m serving, but I have a general idea of the contours that meal will take. Same with any novel, which has to have characters—some nice, some not so nice—following a story with a beginning, a middle, and an end.

The trouble is I could scroll through novel ideas forever. People, images, scenes, stories—all of these are roiling around my head, clamoring in my ear to be chosen. Some are as a fleeting as a chance face I’d see on the train. And since I know I can write anything at this point, I might end up writing nothing. This must be what all writers go through when they are between projects.

For the Thanksgiving project, at least, I knew I couldn’t page through recipes forever. As any good writer knows, nothing cures writer’s block better than an unforgiving deadline. The holiday loomed over me. The turkey was a given. Gravy too. And after sifting through the myriad recipes for stuffing, sweet potatoes, vegetables, pie—editing the menu, as it were—I eventually locked in my choices.

No such deadline looms over me for this fourth book. No guests knocking at the door at an appointed time. I can only go on faith that the noises in my head will quiet down long enough for me to catch the thread of a new story. And make the choice to follow that thread.